Will I Get Deported for a Crime?

Will I Get Deported for a Crime?

Perhaps the most contentious issue immigrants face is deportation, but it actually takes some doing to be physically removed from this country. One way to get deported is by not playing by the rules or rule of law rather, and we’ll take a closer look at what this means. Interestingly enough, the Supreme Court of the United States (SCOTUS) is also looking at language of law in the Immigration and Nationality Act that calls for the deportation of any legal immigrants convicted of “crime of violence,” because it’s allegedly so vague it violates the rights of immigrants to due process under the law and the U.S. Constitution. 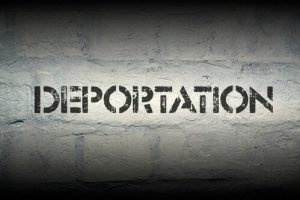 What Crimes Can Get You Deported in the United States?

This is a rather gray area, because the government and ICE will look at past offenses, when considering the fate of immigrants here legally or illegally. Here are some examples of offenses that get individuals placed in deportation proceedings:

What Crimes Are Exempt from Deportation Consideration?

A charge in itself will not start any deportation proceedings, but a conviction most certainly will, if it is serious enough. The following are some examples of those crimes considered exempt from the moral turpitude guidance.

Note: A ruling in the Sessions v. Dimaya case could help clarify what crimes committed by immigrants could get them expelled. As of press time, there has been no ruling in the case.

Are you or someone in your family in danger of being removed from the country for a criminal conviction? If so, get an experienced and knowledgeable Los Angeles immigration lawyer at the Hanlon Law Group, P.C., who can vigorously appeal any deportation proceeding. For more than 15 years, our lawyers have successfully advocated for immigrants’ rights in various types of cases, including those that involve the most basic immigration applications to the most complicated federal proceedings.

We also assist with citizenship, immigration, and Visa services, so contact us today by calling (626) 765-4641 or (866) 489-7612 or by emailing us using the form at the upper right-hand side of the screen. We’re located in beautiful Pasadena, but we also serve clients throughout the Los Angeles, throughout the state of California, as well as from around the world.

1“What Crimes Are Eligible for Deportation?” published in Stateline, Dec. 2016.