Yesterday, President Barack Obama called on Congress to lift the decade’s long embargo against Cuba. Urging lawmakers to follow his decision to reopen the U.S. embassy in Havana, President Obama, explained that “the best way to support our values is through engagement.” 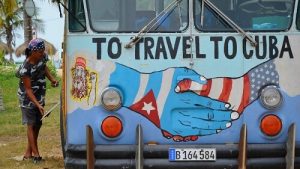 He went on to state that, “we don’t have to be imprisoned by the past… Americans and Cubans alike are looking to move forward. I believe it’s time for Congress to do the same.”

On July 20th, the American embassy in Havana is set to reopen, at which time Secretary of State John Kerry will “proudly raise the American flag over out embassy once more,” Obama has noted. On that day, Cuba’s embassy in Washington will also be reopened.

With open embassies, some are wondering what the next steps will be – and, possibly more importantly, whether Obama will have the pull to make his plans happen. Namely, the big issue now is that, even if Congress agrees to lift the embargo against Cuba, there may be strong resistance to confirming the U.S. ambassador to Cuba given that the Senate is controlled by the GOP.

While Cuban authorities have not issued any official statements as of yet regarding the move to reopen diplomatic relations between the nations, the state-run newspaper, Granma, did print a statement noting that “there cannot be normal relations between Cuba and the United States as long as the rigorously applied economic, commercial and financial blockade continues.”

According to some reports, should the relationship between the U.S. and Cuba continue to thaw, a tourism influx alone in Cuba could result in a $68 billion economic boom.

Opposition to the White House’s Request

Obama’s move to reopen the American embassy in Cuba has not been supported by everyone. Elucidating some of the opposition’s feelings, House Speaker John Boehner has stated that the Obama Administration “is handing the Castros a lifetime dream of legitimacy without getting a thing for the Cuban people being oppressed by this brutal communist dictatorship.”

What do you think about Obama’s move to get the embargo against Cuba lifted? Sound off on our Facebook & Google+ pages.

Do you need help with any immigration issues? If so, you can turn to a trusted Los Angeles immigration lawyer at the Hanlon Law Group, P.C. For more than 15 years, our lawyers have been successfully representing clients in various types of immigration cases, including those that involve the most basic immigration applications to those associated with extremely complicated federal court litigation.