Toddlers Can Represent Themselves in Asylum Cases, Judge Rules

Toddlers Can Represent Themselves in Asylum Cases, Judge Rules

That is reportedly one of the reasons why U.S. District Judge Jack Weil issued a startling deposition stating that these young ones need to represent themselves at court – because they have no one else.

“I’ve taught immigration law literally to 3-year-olds and 4-year-olds. It takes a lot of time. It takes a lot of patience,” said Judge Jack Weil in a recent Los Angeles Times interview. “They get it. It’s not the most efficient, but it can be done.”

The Obama administration also appears to be getting a foothold on this dilemma, as it has been giving approval for Federal officials to quietly seek out private smaller service providers to open smaller and more hospitable facilities in the southwest.

A Look at the Problem of Detaining Children 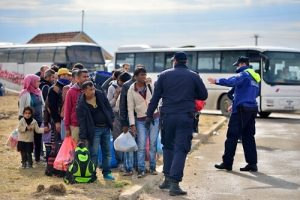 Customs and Border Patrol agents reported an estimated 20,500 unaccompanied children crossing the border from the beginning of October 2015 to the end of January 2016.

As it is, undocumented and unattended children migrants in most cases have no money and no guardian spokesperson to address their immigration issues. Several member of congress are also in favor of establishing legal counsel for such children, who often times are afraid to go back to their country of origin because of crime and violence.

Advocates say the migrant children need a fair trial, before allowing an immigration court to rule on their deportation status. However, according to a recent Washington Times article, three former federal judges, legal advocates, and child psychologists have disagreed with Judge Weil’s belief that toddlers can and should defend themselves. They point to the evidence that suggests that children ages 3 to 4 are still in cognitive and communication development, and may not have the ability to logically reason yet.

These facilities would supposedly house up to 500 people and personnel would meet strict social service standards to provide accommodations that would benefit children, according to a request filed in mid-March by Immigration and Customs Enforcement (ICE). Incarcerating immigrant children is a fairly new problem, which the current administration instituted as a temporary solution to the influx of children and families that fled to the U.S. from Central America in 2014.

The issue of confinement of foreign children sparked challenges to the administration from two different federal courts, one of which issued a court order stating the administration violated the 1997 Flores agreement that has clear-cut standards and guidelines the federal government must adhere to when dealing with detained children. Meanwhile, action and advocacy groups like Refugee and Immigration Center for Education and Legal Services (RAICES) believe the current administration needs to shut down family detention centers completely.

If you need  help fighting deportation – or in securing any immigration status change in the U.S., you can turn to a Los Angeles immigration lawyer at the Hanlon Law Group, P.C. Contact us today by calling (626) 684-3712 or (866) 227-5527 or by emailing us via the contact form on this page to find out more about our services, your rights and how we can help you.