Reopening “In Absentia” Order of Deportation

Reopening “In Absentia” Order of Deportation

Over the past several years, the USICE and related law enforcement agencies have embarked on an aggressive campaign to apprehend and remove from the United States thousands of aliens against whom “final orders” of deportation or removal have been entered.  Most of these individuals actually appeared in Immigration Court and were informed of the order for them to either leave the US voluntarily within a specific time frame or be deported.  A high percentage of these aliens, however, never appeared in court, and were ordered deported “in absentia.”   While aliens who appeared in court and had their rights explained to them have very limited opportunities for relief from deportation, there may be relief for thousands of aliens ordered deported in absentia through the filing of Motions to Reopen.

Generally, Motions to reopen removal proceedings must be filed within 90 days of the Immigration Judge’s or Board of Immigration Appeals’ (“BIA”) order. Only one motion to reopen is permitted. This standard type of Motion to reopen is designed for cases in which new evidence or new eligibility for certain forms of relief from deportation become available after the court issues its order.  Because of the strict time and numerical limitations, however, Motions to Reopen to apply for relief previously unavailable or based on changed facts are relatively rare. 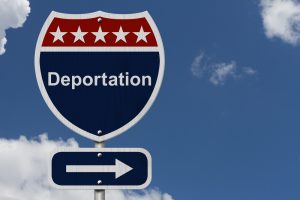 When an alien has been ordered deported in absentia; i.e., without having been present at the hearing, the rules are quite different.  If the alien did not receive proper notice of the hearing, the Motion may be filed at ANY TIME after the order was entered.

Proper service of notice is accomplished by either personal service of a Notice to Appear (“NTA”) (Formerly, Order to Show Cause (“OSC”)), or if personal service is “not practicable,” then by regular mail to the alien’s last known address or counsel of record. The BIA has held that Service by mail to the alien must be by delivery to the alien or some other responsible person at the address provided by the alien.  If the alien did not receive or cannot be charged with having received proper service, the Motion to reopen and rescind the in absentia order may offer relief.  While the Motion to reopen is pending, the order of deportation is also stayed, such that the USICE cannot physically remove the alien during that time.

The NTA or OSC warns the alien that he will be ordered deported in his absence if he fails to appear at the hearing.  In Matter of G-Y-R-, 23 I & N Dec. 181 (BIA 2001) the BIA  held that if the NTA was sent to an old, outdated address, and the certified mail receipt was returned as “unclaimed,” then the alien can be “charged” with having received the NTA. The BIA reasoned that since the alien had not received the warnings in the NTA as to his obligation to provide a current address, service was invalid.

In another case, In re: M-D, 23 I & N Dec. 540 (BIA 2002) however, the BIA held that an alien was properly charged with service of an NTA, when the certified mail receipt was returned as unclaimed, but the alien did not dispute the correctness of the address that he had recently provided the legacy INS, even though he had not received the written warnings in the NTA itself.

While the BIA’s rulings seem inconsistent in these two cases, it relied on the “factual distinction” that the alien in M-D- did not dispute the accuracy of the address, which he had recently provided the legacy INS, whereas in G-Y-R- the Government had sent notice to an address from which the alien had moved several years earlier. Since every case is different, and the number of scenarios under which a Motion to reopen an in absentia order may be feasible are too numerous to mention here, any person who is the subject of a final order of deportation should consult a competent attorney, with demonstrated experience in these matters.  The attorney should be able to advise as to what evidence was presented against him to establish his removability and proper service, and what may be done to rescind the order.