There’s always some truth in old aphorisms, like “there’s always a rotten one in the bunch.” It also seems to be a good metaphor for what happened in the Paris shootings and bombings that occurred November 13, 2016, when suspected ISIS terrorists killed 130 and wounded hundreds more. That tragic event sparked so much concern and outrage abroad that by that following Monday afternoon at least a dozen U.S. governors had released statements that their states would block or refuse to accept refugees.1

The big picture question in all this is this: Is it legal for U.S. governors to refuse asylum to refugees fleeing a hostile war-torn country? The answer may surprise you!

Those states issuing statements that they will block any attempt to resettle any Syrian asylum seekers or refugees from entering their states include: Alabama, Arizona, Arkansas, Florida, Illinois, Indiana, Louisiana, Massachusetts, Michigan, North Carolina, New Hampshire, Ohio, and Wisconsin.

Can States Decide Which Immigrants Get Resettled inside their border? 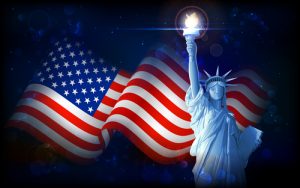 There’s been some pretty heated response to the Paris attacks by a dozen or more governors, including a letter from Texas Gov. Greg Abbot (R), who wrote “as governor of Texas, I write to inform you that the State of Texas will not accept any refugees from Syria in the wake of the deadly terrorist attack in Paris.”2

These state orders sound legitimate in theory, but there’s no laws on the books that allow governors the right to dictate immigration policy to the president. The Supreme Court actually has set precedent on such matters, as explained in Hines v. Davidowitz: “…the supremacy of the national power in the general field of foreign affairs, including power over immigration, naturalization and deportation, is made clear by the Constitution.”

There is also the irrefutable statutory authorization that a sitting president can use to accept asylum seekers from hostile countries to our own. It’s called the Refuge Act of 1980, which was created and passed so the president could approve and admit those who face “persecution or a well-founded fear of persecution on account of race, religion, nationality, membership in a particular social group, or political opinion.” This authority is deemed even more powerful, if the circumstance involves some type of “unforeseen emergency refuge situation,” like the Syrian refugee disaster.

Bottom line is all of these states governors who say they will block or refuse the president’s authority and power to resettle refuges would probably be in contempt of Supreme Court ruling and executive authority, as all states must adhere to this type of order.

Do you or a family member need help with resettlement in seeking asylum as a refuge from a hostile region in America? If so, you call a Los Angeles immigration lawyer at the Hanlon Law Group, P.C. at (626) 684-3712 or (866) 227-5527 or by emailing us using the form at the upper right-hand side of the screen.

1“Paris attacks: What happened on the night” published in BBC News, December 2015.

2“Paris attacks: What happened on the night” published in Think Progress, November 2015.