“Laws That Shaped L.A.” Looks at Impact of Immigration on Los Angeles

“Laws That Shaped L.A.” Looks at Impact of Immigration on Los Angeles 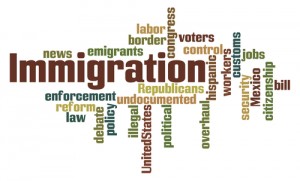 An ongoing series of columns on KCET.org is intended to shed light on various laws and regulations that have had a strong impact on the development of Los Angeles.

An ongoing series of columns on KCET.org is intended to shed light on various laws and regulations that have had a strong impact on the development of Los Angeles. “Laws That Shaped L.A.” has looked at everything from a local law that requires helipads on tall buildings to the federal Clean Air Act.

It is easy to see how everything from public art programs and tax policies to civil rights and immigration reforms can shape neighborhoods, infrastructure and a city’s identity — for better or worse. Fittingly, the series recently looked at the passage of the Immigration Act of 1990, and its decidedly positive impact on communities throughout Southern California.

The column quotes Professor Edward J.W. Park of Loyola Marymount University’s Asian Pacific American Studies program, who explains that the 1990 act represented a significant change in policy because it increased access for immigrants with significant education and skills. Immigrant communities with roots in Russia, Armenia, Brazil, Japan and Ethiopia soon transformed neighborhoods from Koreatown to the Fairfax District and the San Gabriel Valley.

Another new priority under the Immigration Act of 1990 was its focus on temporary visa programs, such as H1B visas and “extraordinary ability” visas, as well as the EB-5 wealthy investor visa and other E-visas to encourage small business entrepreneurs. While this meant a great deal of focus on immigrants of means, the act also created the lottery system to encourage immigration from countries that have traditionally had low representation.

The series also recently paid tribute to the 1965 Immigration Act, which emphasized Asian immigration for the first time after decades of favoritism toward Europeans. This set the stage for significant immigration from Hong Kong and Taiwan, followed by Vietnamese, Cambodians and Laotians, that infused L.A.’s Chinatown with great vitality and diversity.

Many policies fostered by these laws remain relevant to people who want to work in the U.S. or become citizens. Los Angeles immigration lawyers continue to provide solutions for people from around the world who want to start a new life in America, obtain a green card and settle into our diverse community.