While the status of the immigration executive action (IEA) remains in limbo until later this month, a report compiled by the Center for American Progress (CAP) has pointed out that, should the IEA be permanently blocked, the resulting costs of deporting the about 5 million undocumented immigrants in the U.S. would be an astounding $50.3 billion. Per person, this works out to deportation costs of about $10,070.

Breaking down this down in another way, the Center for American Progress noted that these deportation costs would include:

Although the opposition to the immigration executive action has been primarily focused on alleging that the IEA is unconstitutional, not much has been said in the way of how these deportation costs would be covered if the IEA were not to take effect. 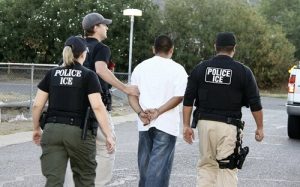 It’s important to point out that the numbers above assume that, should the immigration executive action be permanently blocked, efforts will be made to deport all 5 million undocumented immigrants in the U.S.

Opponents of the IEA have noted that they don’t necessarily want or intend to deport every single undocumented immigrant in the U.S., as it just may not be feasible. The primary objection that this opposition has, it contends, is that these immigrants could work and receive benefits in the U.S.

With the IEA in jeopardy, some are calling for Congress to come together to enact some meaningful immigration reform that could replace DACA and still provide help to undocumented immigrants.

Such sentiments were noted by Philip E. Wolgin, Associate Director for Immigration at the Center for American Progress and report author, when he stated the following:

Instead of pretending that the United States will deport all 5 million individuals shielded by the president’s executive action, Congress should come together and pass an immigration reform bill that puts them on a path to legal status, toward becoming full and equal members of society.

Do you need help with any immigration issues? If so, you can turn to the Los Angeles immigration attorneys at the Hanlon Law Group, P.C. For more than 15 years, our lawyers have been providing our clients with the highest quality immigration legal services.

While this means that you can rely on us to provide you with personalized, superior representation for your immigration needs, it also means that you can be confident that your Hanlon Law Group lawyer will answer your questions quickly, clearly and honestly while working to bring your case to a successful resolution.