Skip to content
Home/What to Do if ICE Comes Calling – Know Your Rights!

What to Do if ICE Comes Calling – Know Your Rights! 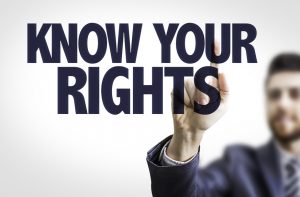 What to Do if ICE Comes Calling – Know Your Rights!

With the inauguration of Donald Trump as President of the United States, US Immigration and Customs Enforcement (ICE) has already been ramping up arrests of non-citizens at record rates. While ICE arrested and deported more people under President Obama than his predecessor, the Obama Administration focused on criminal aliens and previously deported aliens as an enforcement priority.  The Immigration Courts are currently staffed at the highest levels in history, with plans for the hiring of many more Immigration Judges and DHS attorneys.  As Trump and Attorney General Jeff Sessions press for indiscriminate prosecution of the undocumented, individuals lacking lawful status must be aware of their rights and understand what to expect when ICE comes calling.

One of the most difficult and disturbing experiences any individual may have concerning US Immigration law is the facing an Immigration Judge to defend his right to stay in the US. ICE under Trump has been stepping-up arrest and detention levels of immigrants in the US to unprecedented levels.  Many of these arrests have come about as a result of worksite raids or operations in which ICE is allegedly seeking out criminal aliens, however, in reality, many otherwise innocent but-for undocumented status people are being picked up.

The wisdom of such broad-sweeping arrests is dubious at best.  Worse, ICE’s official policy has emboldened ICE officers to try and disregard individual rights and increase the number of investigations and arrests of those who entered without inspection or nonimmigrant visa overstays, which were a low enforcement priority under Obama. Individuals who have been contacted or questioned by ICE in such matters must understand their rights in order to avoid making matters worse for themselves if they are charged in removal proceedings.

First of all, people must understand that they should not panic merely because a friend, coworker, or neighbor has been arrested by ICE.  Although panic is a normal human response to frightening stimuli, such as a knock on the door or telephone call from an ICE Investigator, panic causes people to make errors in judgment, such as giving an officer false information or unnecessarily admitting their own immigration violation when the officer is seeking information regarding someone else.  Lesson number one: Do not panic.  Overstaying one’s visa is not a crime.  Removal proceedings are civil proceedings, where people can be charged with immigration violations.  The worst possible penalty for these violations is being sent home, assuming the individual is not eligible for relief from removal and all appeals have been exhausted.  An Immigration Judge cannot sentence a “visa overstay” of “EWI” to prison!

Even though removal proceedings are not deemed “criminal” proceedings, ICE Officers must respect the Constitutional rights of any individual they are investigating or arresting.  If confronted by an ICE Officer, an individual has a right to be told what information the officer seeks.  ICE Officers have broad discretion to hold someone found to be in violation of law and set an initial bond, so one must exercise care in providing information and responding to an initial telephone call or in-person visit.  ICE Officers are more likely to hold a person without bond if they believe the person has been deceitful or evasive in the face of simple questioning.

ICE officers in the field are wearing uniforms marked “POLICE” which can mislead the unwary.  ICE Officers must respect an individual’s rights to privacy and counsel.  ICE cannot enter a person’s home without a specific judicial warrant, authorizing their entry for a specific purpose, such as a search for a particular person or item.  Not panicking and informing the officer that one has retained or desires to retain an attorney is the most important step a person can take under these circumstances.  If ICE decides to take a person into custody, they must inform the person’s relatives as soon as possible as well, so that they may make arrangements for visitation and potentially hiring counsel before any court dates.  Don’t panic.

Once ICE decides to process an individual for removal proceedings, they must issue a Form I-862, Notice to Appear (NTA) in removal proceedings.  The Notice will generally list the allegations on which any charge that the individual is subject to removal is based, list a date for an initial hearing and inform the person of their rights to competent translation, attorney representation and fundamental fairness in the proceedings.  Unfortunately, many people receive NTA’s and still have no idea what charges are laid against them and what rights they have to fight back.   As a first step, and the sooner the better, people need to make sure they understand their rights, including right to a lawyer, and assert their rights confidently under the United States Constitution.