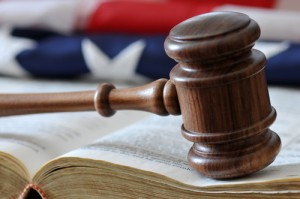 As the immigration debate begins to heat up once again in the US Congress, some Republicans are taking a scrutinizing look at the Fourteenth Amendment.

As the immigration debate begins to heat up once again in the US Congress, some Republicans are taking a scrutinizing look at the Fourteenth Amendment. CBS reports that Senator Lindsey Graham (R-SC) has called the 14th Amendment’s guarantee of birthright citizenship “a mistake,” saying he may introduce a constitutional amendment to eliminate automatic. Additionally, Senator Jon Kyl (R-AZ) and other Republicans advocated for congressional hearings on the issue of birthright citizenship.

Section 1 of the Fourteenth Amendment was originally enacted to prevent the states from denying citizenship to former slaves and provides:

Republican leaders are calling the Fourteenth Amendment into question because it guarantees citizenship for children born in the U.S. regardless of the immigration status of their parents. Senator Kyl questions whether there should be a “reward” of citizenship for the child when both parents are in the country illegally. A recent Pew Research Center study shows that in 2009, there were approximately 4 million U.S.-born children of undocumented immigrant parents living in the country and another 1.1 million foreign-born children of undocumented immigrants resided in the nation. An estimated 340,000 of the 4.3 million babies born in the U.S. in 2008 were offspring of undocumented immigrants.

CBS says the call to repeal is based upon a growing anti-immigration sentiment among some voters in America. Far-right Republicans such as Kyl seek to ride this wave, taking aim at the children of illegal immigrants, sometimes called “anchor babies,” whose parents often stay in the U.S. after the births. Kyl says it is not a matter of being anti-Hispanic but rather a matter of wanting to enforce the law. Critics are obviously concerned with the overt anti-immigrant sentiment such a proposal fuels and Kyl’s explanation lacks credibility in light of his stance on similar issues in Arizona in the past.

The good news is that not all conservative politicians and pundits agree with Graham and Kyl. Noting that a repeal of the 14th amendment’s citizenship guarantee would “punish the innocent,” Former GOP presidential contender Mike Huckabee said he does not support a repeal of the Fourteenth Amendment. Huckabee said while he is not a proponent of an “amnesty” program, he does not believe in punishing children for the bad acts of their parents. Huckabee reportedly told National Public Radio (NPR) that the nation would be better served giving all children opportunities to succeed as citizens, even if they were not born in the United States.

Huckabee poses a different question than Kyl: “Is

[an undocumented child born outside of the U.S.] better off going to college and becoming a neurosurgeon or a banker or whatever he might become, and becoming a taxpayer, and in the process having to apply for and achieve citizenship, or should we make him pick tomatoes?” Huckabee argues that it is better that they become citizens.

Conservative broadcaster Lou Dobbs has noted, in explaining his disagreement with any proposal for repeal, his belief that “the Fourteenth Amendment, particularly in its due process and equal protection clauses, is so important. It lays the foundation for the entire Bill of Rights being applied to the states.” Some opponents of repeal have expressed concern that it would open the door to the Supreme Court overruling prior landmark due process and equal protection cases grounded in the Fourteenth Amendment. Due to the highly controversial nature of the proposed repeal and the unwillingness of many conservatives to align themselves with such a movement, repeal is highly unlikely at present. With great numbers of dissatisfied voters in the US looking for a rally cry in the upcoming elections, however, the debate is far from over.