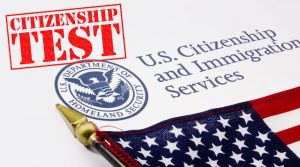 If you are preparing to take the test for U.S. citizenship, it’s a good idea to study and prepare yourself ahead of time so you have the best chances of passing and officially becoming an American citizen.

Here  we will list some of the more common questions that appear on this test, along with the answers to these questions. If you need help with any immigration matters for you or a loved one, the trusted Los Angeles immigration lawyers at the Hanlon Law Group are ready to talk to you and help you resolve your issues as expeditiously as possible.

Questions about the U.S. Government

Questions about the U.S. Flag

Questions about the U.S. Constitution

Questions about the U.S. Courts

To learn more about our citizenship, immigration and deportation defense services contact our Los Angeles immigration attorneys today by calling (626) 684-3712 or (866) 227-5527 or by emailing us using the form at the upper right-hand side of the screen. From our office in Pasadena, we serve clients throughout the Los Angeles area, across the state of California and from around the world.