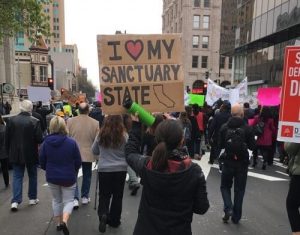 Cobbling together health care plans for the last big group of uninsured residents, counties throughout California are reportedly digging deep and coming up with creative budgeting to take care of foreign nationals who now call California home.

This effort has been triggered, at least in part, by some of the shortfalls of the Affordable Care Act (ACA), which created a roadblock for foreign nationals to secure health care (even if they could afford it) due to their lack of documentation.

And that’s why local governments in California have stepped in to create programs to eliminate these roadblocks.

“Without a state solution, the counties are forced to address it. We do believe that as more and more counties move to see the value in providing a smarter safety net, that becomes a bridge to a statewide solution,” Anthony Wright, executive director of the consumer advocacy group Health Access, told the California Health Report in January.

California has seen a 4.7 percent drop in the number of individuals lacking health insurance coverage from 2013 to 2014, according to the U.S. Census Bureau. While this has largely been due to the ACA, some lawmakers are pushing for a statewide solution in order to prevent unnecessary costs and bureaucratic red tape.

According to these proponents, a statewide solution could provide uniformity, equality, a single set of rules and regulations. In contrast, however, without a statewide solution, the counties are forced to figure out their own solutions, which may differ from each other and generate future challenges.

To put this into perspective, at the beginning of 2014, California only had four counties of 58 funding health care programs for undocumented immigrants. By the end of 2014, there were only 11 counties in California left that were reportedly not providing some type of coverage plan for undocumented foreign nationals.

While authorities throughout California continue to work on this issue, one such solution could come in the form of Senate Bill 10 (SB10), which seeks a federal waiver to allow foreign nationals to purchase unsubsidized coverage through the state’s ACA-Covered California health insurance exchange. SB 10 is sponsored by state Sen. Ricardo Lara (D-Bell Gardens).

Another possible solution could arise in Senate Bill 4 (SB 4), which is also sponsored by Sen. Lara and which would provide funding to cover undocumented children through Medi-Cal, a health care program based on financial need.

What do you think about the efforts being made to provide health care to undocumented foreign nationals in California? Share your opinions with us on Facebook & Google+.

If you need help with any immigration issue, contact a Los Angeles immigration attorney at the Hanlon Law Group, P.C. by calling (626) 684-3712 or (866) 227-5527 or by emailing us using the form at the upper right-hand side of the screen. From our offices in Pasadena, we serve clients throughout the Los Angeles area, across the state of California and from around the world.