Most Americans think refugees and foreign nationals seeking asylum in America get the red carpet treatment. Well, in a lot of cases, that couldn’t be further than the truth. Because instead of walking on a red carpet a lot of times asylum seekers find themselves staring at red lines on the floor of privately run prison facilities that detain immigrants while the system processes them into society, and in some cases that process can take months of waiting in a cold, heartless jail.

“It’s a nightmare inside,” said 35-year-old, Pakistan-born refugee Daniel Usman, who holds a college degree in electronics. “They treated us unjustly.”1

A new proposal put forward by Sen Ricardo Lara (D-Bell Gardens) and a group of immigration advocates calls for new standards and restrictions for immigration detention facilities in California. The proposal would allow for immigrant detainees to file civil action against private and government run detention facilities, if their rights are violated. 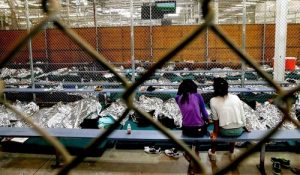 Usman had a nearly four month stay at the Theo Lacy Facility that is run by the Orange County Sheriff’s Department. He claims he was kept in a cold area with no jacket, received meager medical treatment, and treated inhumanely by deputies.

Likewise, immigration advocacy watchdog group Community Initiatives for Visiting Immigrants in Confinement filed a complaint on behalf of a group of nearly a dozen men, who allege they have been physically assaulted, and claim those went on hunger strike received retaliation relocations, and received poor medical treatment.2

“The Dignity not Detention Act takes a stand against the mass incarceration of immigrants in detention facilities and inhumane immigration detention conditions,” Lara said in a statement. “Our state and local governments should not be complicit in this awful practice of profiting off of human suffering.”

The Human Disconnect and Liability for Violating Human Rights

Obviously, there is a disconnect between the immigration detention facilities and the kinds of workers they employ, who are trained for criminal detainees and not immigrants. This fact isn’t lost on Lara’s Dignity not Detention Act, but there’s also the real world of what the industry currently bares. Eventually, a middle ground will have to be found that will accommodate our foreign visitors – many of whom will become future citizens – without as much inconvenience and abuse as possible.

If you or someone you love needs experienced help securing an immigration status change in the U.S., contact a Los Angeles immigration Attorney at the Hanlon Law Group, P.C. by calling (626) 684-3712 or (866) 227-5527 or by emailing our firm via the contact form on this page.